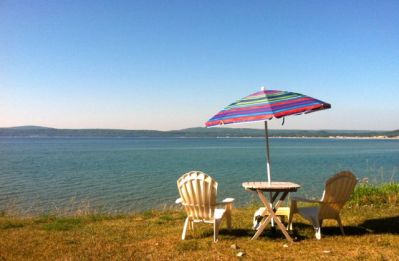 Beautiful Petoskey! I’ve been resting here since my birthday walk-a-thon. I’ve walked from the campgrounds along Lake Michigan into town. Mom, Grandma, Sarah, and a friend of Sarah’s came and visited me yesterday. When Sarah saw me she said “I thought you’d look worse!” so I made sure to show off my blisters, scratches and bruises. Mom gave me a GPS, which I reluctantly accepted since I lost my last one. She also gave me a huge pile of other birthday gifts, which was may have been nice but I experienced it as frustrating. It’s not that I don’t appreciate the gesture and its not that I don’t like what she gave me, but I am literally carrying everything on my back and this trip is not about stuff. There are so many birthdays that have been and will be about gifts, this is not one of them.

As the latitude increases, the population decreases. From the relatively populated Traverse City area to the tourist hub of Mackinaw, into the true wilderness of the Upper Peninsula, my trail will become more raw as I gain experience. I wonder if I’ll make it all the way to Copper Harbor and Isle Royale. This week has been hard but I have had the safety net of nearby towns and even my family nearby to offer support as I need it. I look forward to slipping away from those supports. I want to test myself even more.

Since I’ve been in Petoskey, I’ve had my phone available to me as much as I want it and I’ve wanted it a lot. I feel extremely lonely for social contact, especially with guys. I’ve binged on Facebook and can feel myself needy for validation about what I’m doing. This trip is objectively awesome! Why do I need other people to tell me so? It’s reminder that I still have to work on my strength of self but it’s also a lesson that sometimes a solution can create it’s own problems. This trip might help me be better able to spend time alone but it might also create a social deficit that I’ll need to make up for later.

One lesson that I am really enjoying is a renewed sense of consequences. The choices I’m making have tangible visible results. It is all literal and actual and visible. I am much more aware of the effects of the food that I put in my body than I have been for years.  The simple system of cause-and-effect has been imbalanced through years of bulimia. Every time I purged, I effectively annulled the consequences of what I ate. I was cheating. Today, I gave away some Swiss Miss packets that Mom game me. I knew they would taste good but they were sugar-free and I knew they would mess with my stomach. The free calories weren’t worth the physical discomfort to off they went! I need my body to perform, I need it to do what I ask of it, and I want it to be as painless as possible so I am going to try to treat it in the best way possible. Small things like this make me feel like I’m regaining my humanity!

When I was buying gear for this trip, I was very reluctant to get hiking poles. The shiny metal over-engineered sticks just seemed lame and out-of-place with a backcountry trip. Now I love them and think about them kind of a lot while I walk. Let me count the ways:

Right now, I’m camping behind an out-of-commission train engine on display next to a fairly busy road. It’s amazing how easy it is to become invisible if you leave the obvious places that people travel in. I recall the first time I rode a train from Ann Arbor to Chicago. Within the first 10 minutes of the ride, I passed through Ann Arbor, Dexter, and Chelsea- the places I have spent 99% of my life, but the towns were visible only a few seconds and the rest was woods. On this trip, I spend my time in the gaps between the spaces where most people pass their time, and those gaps are often much bigger and than the populated spaces. Want to know how to escape civilization? Just walk perpendicular to the direction of travel of other people, and it won’t take you long. Most people most of the time stick to roads, sidewalk and trails, you don’t have to go very far off those dedicated spaces.

Usually, I crave attention and company but it’s different on the road alone. I don’t want to attract attention as an illegal (?) vulnerable solo female camper. I also like feeling sneaky. ☺

Continue to the next entry in the series here: Day 11: Crooked Lake to Cross Village

Go back to the last entry in the series here: Day 8: Side of the tracks to Petoskey State Park