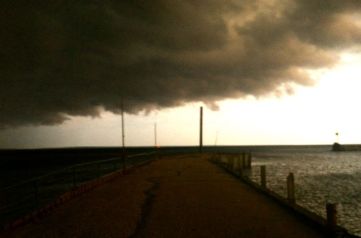 Oh my god, last night. First of all, I’m so glad that I stayed in a hotel. We had a colossal storm. The wind was so bad that a semi-truck was actually blown off the Mackinaw Bridge. Good call, me.

I really enjoyed the storm since I knew I had a dry space to go back to. I scampered all around town, staring at the massive incoming clouds and taking pictures of the foreboding weather. It looked like there was a sky battle going on between Lake Michigan and Lake Huron. I thought a line from the book I just read where Nicola Tesla describes a “brisk wind, richly charged”- that’s exactly how it felt, it was electrifying.

After I checked into my hotel I washed all my clothes in the tub and took a long hot shower. I went to the visitor’s center to figure out the ferry situation and to ask for a dinner recommendation. I expected to be eating so healthy on this trip but most of my meals are trail mixes and processed food- lots of sugar and salt. I asked the really nice information booth-lady where I could get a good salad and she drew a blank saying: “there aren’t a lot of vegetables north of the 45th.” What a line! Instant classic. In lieu of healthy food, she recommended the Keyhole Bar as an authentic local hangout.

I took shelter from the rain in the bar where I met a sleazy yet harmless old dude who seemed to be a big deal in certain local circles. He told me he was a Vietnam veteran and I expressed my deep respect for what he must’ve endured. I mentioned how miserable I was after considerable rain we’d been having, knowing it must be incomparable to what he put up with. He said that, yes, the rain was never-ending and difficult to tolerate, but that he was lucky to be stationed at a large base where they slept indoors all night, and stayed indoors much of the day. I’m not proud to say that I had a moment where I felt more hard-core than a Vietnam vet (bullets and terror and death notwithstanding, of course)! I was quickly put back in my place though when he launched into stories about gangrene. He graciously shared with me that he never wore underwear again after that war, a comment that, in the context of that discussion is too terrible to imagine. In case I didn’t get it, he connected the dots for me with a helpful explanation “butt rot.” Ok, you win Vietnam vet.

Back at the hotel, buzzed off two beers, I took a good long look in the mirror for the first time in awhile and somehow arrived at the conclusion that my hair was too long. I have never cut my own hair and I didn’t even have scissors, but I do have a knife and I knew if wouldn’t matter if it looked horrible. Cheap camping knife in hand, I started hacking away. I didn’t expect to do much but in the end I cut off a couple of inches. Shockingly, it looks pretty damn good (at least from the front, which is all I can see) but even if it doesn’t, I don’t care. I love that it doesn’t matter! Almost as much as quitting my job and taking this trip in the first place, sawing my hair off with a camping knife is one of the most liberating things I ever done.

I think I found a way to make staying in a hotel almost as hard-core as camping! Time to show my killer new look to the world.

This morning, I checked out of the hotel and set off to run a few errands- buy a ferry ticket, recycle my batteries (the GPS guzzles one per day), look up a couple things online at the library. On my way back from the library, on the weird sidewalk underneath an overpass, I saw one of the most surprising things I could ever imagine- my own shoe! My shoes were wet so I was walking around in my flip-flops with the shoes tied to my pack to dry. What makes it all crazier is that I didn’t even want to take the same route back from the library since I like to explore, but that darn sidewalk was my only choice. I can’t even really imagine what it would’ve been like to arrive in the UP, in a town with no shoes stores let alone outfitters, look at my pack, and realize I only had one shoe. I do know that I would probably never find this one. Jesus Christ. As it was, I took a picture of it sitting there on the sidewalk, waiting for me to come get it, and tied it firmly back in place. 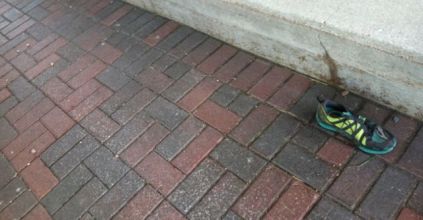 After that insanity it was time to catch the ferry to Mackinaw Island! It was insanely beautiful out there, the water was so blue it looked like something out of a Caribbean postcard, then I spotted some massive wind turbines churning away in the distance and I was just filled with pride: this is Michigan! I used my time on the ferry ride to deal with one other chore and register for health insurance. I am covered until the end of the month through work but after that, I’m on my own. Continuing with my coverage from work would cost $800 a month, which I can’t practically or morally afford so I’m scrambling for something else. It doesn’t really seem like an option to have no coverage either, given my current “lifestyle” and it’s abundant perils. I paused when the guy on the phone asked me if I had any chronic problems or “pre-existing conditions.” I answered “no,” hoping that it was actually true. I made it out of fudge country without relapsing but it wasn’t easy and I know I’m not “recovered” yet.

Mackinaw Island was amazing. All my pre-conceived notions were utterly shattered. I got a bike from one of the hundred rental shops that rent bikes out for the fabulously affordable price of $7/hour and they even offered to watch my pack for me. It was great to cruise around the island, reading the historical plaques and acting like all the other tourists. It started raining again though, which wasn’t so bad because it was warm, but wasn’t so good because I definitely splashed horse mud up on myself biking around on the soggy roads. No question, I definitely saw the island with new eyes today, in part because I was alone and free to go where I wanted, and in part beca 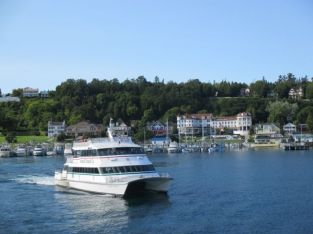 use it was a fabulous contrast to the solitude of the woods I’ve experienced lately, and will be returning to soon.

I returned the bike after an hour and a half and there was a high-school-aged boy at the desk. He tapped away at the calculator for awhile and finally looked up at me with the final assessment: “$10.50 please,” he said. I couldn’t help myself. “You really should be able to do that in your head, you know” I said. I tried to soften my lecture by telling him it would make the boring job more interesting. I should know- one day last week I spent a solid hour doing mental math (factorials!) just for kicks. 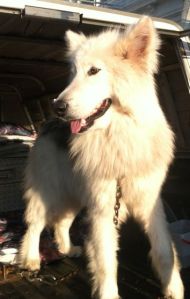 I arrived in St. Ignace this evening within 30 minutes had just about the most Yooper experience ever! I saw what I thought was a beautiful big dog up in the bed of a pickup with a Native American man standing next to it. I asked if I could pet his dog and he said “No but you can pet my wolf.” Do I believe him? Not entirely. Anyway, it was really gorgeous, I really hope I see one out on the trail, though ideally from a safe distance. The owner started getting creepy on me “oh, you are such a beautiful woman” he said “where are you staying? I would love to buy you a campsite.” I’m not kidding. I just laughed and said I was alright. Now that is a UP pickup line. Hilarious. In my head I imagined wagging my finger at him and saying “I’m an independent woman! I pay for my own tiny square of dirt to sleep on!”

I finally studied my maps in some detail and it looks like I am heading into a truly remote area. Apparently, with the great lakes so nearby, no one situates themselves inland, and my path from the

south to the north coast of the UP won’t pass through a single town or road. I have to actually plan my food and make preparations. I bought a bunch of stuff at the grocery store and made a big mess in their walk-in cafeteria area to organize everything. My favorite part was marking arbitrary lines on the long-as-my-shin chunk of sausage I bought to daily meat rations.

I had the food pretty well sorted out but I was still sitting on that pile of used batteries that I didn’t know what to do it. I turned to the only other person there, maybe a 60-something man and asked him if he knew where I could recycle batteries. He said “no” but immediately had a bone to pick. “Since you interrupted me just now, let me ask you something, just what in the hell are you doing?” I told him about my trip, excepting one of the universal responses of admiration, respect, or at least interest that everyone else has given me. Instead he immediately started attacking me, he said he has three daughters of his own and would never let them do something so stupid. He asked me if I’d heard of the girl who recently got skinned alive. “No, was she a hiker?” I asked. Apparently not. So bad things happen to people sometimes whether they hike or not. He told me it was dangerous. I told him I didn’t believe in living in fear. He told me I had to live in the real world. I don’t know why I didn’t back down but I didn’t. I went through the list of all my reasons for doing the trip “I’ve never travelled alone before, I wanted to do something alone, I just got divorced…” Boom. That was it. He suddenly stopped me and said “you just got divorced? Wow. As long as you’re not hitting the bottle you’re doing alright, you do whatever you need to do.” Ha! I’d converted him! In the end he not only gave me his blessing, he even took my batteries and promised to recycle them. It was pretty amazing. So far, my faith in strangers hasn’t steered me wrong, I hope it continues.

I hardly hiked at all but this has been a fantastic day. My pack is fully stocked for the wilderness ahead.

Continue to the next entry in the series here: Day 15: Straits State Park to Brevoort Lake

Go back to the last entry in the series here: Day 13: Wilderness State Park to Mackinaw City