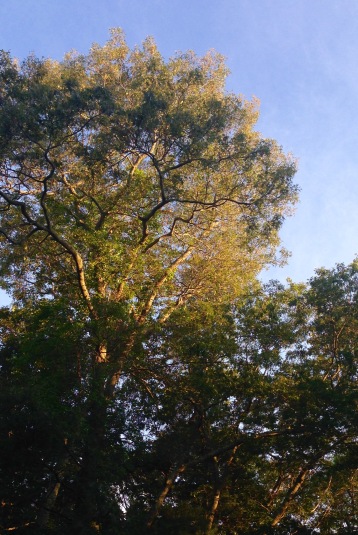 Written in honor and memory of friend and colleague Steven Kolberg, whose battle with cancer and and dance with life ended today.

We drove to that strange state
packed tight in the car and buckled in
with greeting cards and a somber air.

There in the back yard,
I was surprised that he could see me,
and that he looked like himself
and that the lawn was lush green with life

It had the strange feel of a graduation party combined with a wake:
An uncle here, a high school friend there,
“Amy says hi” and “What’s your favorite beer these days?”

But there was a gurney on the yard with a thick body bag over it,
which turned out to be a kayak but oh my god, the thought!
And there was his comment about not being able to taste sugar or feel temperature or read anymore.
And there was a mountain of pill bottles just across the counter from the spread of submarine sandwiches and brownie platters and veggie dip.

We told stories,
and laughed
and paused awkwardly because what do you say?
This is his last party.

Sometimes, in conversation, we took turns touching the terrible issue,
asking or lamenting or consoling lamely.
But we always gave it back, like a hot potato, to him,
whose job it was to carry until the end.

I overate until I felt ill.
Was I hiding from the terrible feelings?
Or forcefully reminding god that I still have much to learn,
I’m not ready yet, see?

He was adopted as a child.
I remember he said he never wanted to find his birth parents.
He seemed not to need a past, not that past.
And now he has no future.

I have known dead people before.
Grandma was sent to hospice
and Amanda thrown from the car.
But I’ve never lived anything quite like this.
I’ve never known someone my own age to be given deadline.

It’s hard to talk about the death of a young person.
We say they were “taken before their time.”
But that is not true.
Their time is their time.
Indelibly. Only.
We are all taken at exactly our time.
We only have a minute but there’s eternity in it.

Are we allowed to hear in each song’s lyric, a new meaning for this day?
Are we allowed to cry?
Are we allowed to be happy that his mother is an oncology nurse?
That he can die in the comfort of this beautiful home?
That he was able to say all goodbyes and make all amends?
That he’s not so young to have never lived but not so old to leave behind a wife and kids?
Are we allowed to appreciate the Blessing of Life and still maintain the blissful dissociation between “those who will die” and ourselves?

We stay too late at the party, afraid to do the thing we came here to do:
say goodbye.
He has receded to his bedroom, weak from a day of living so hard.
And so we go to him, two at a time, and have a real conversation,
one that ends not with “see you soon” but “goodbye” and a forced smile.
Upon leaving his room, each face falls when the feet hit the landing.
It’s impossible but it’s happening.
It’s devastating but he’s dealing.

We pile back into the car
and leave the lovely house with the wilted rose bush behind.
We could crash on the ride home, we could die right now. We are not immune!
But we won’t.
And we don’t.

On the road from Rhode Island,
I try to leave it behind.
I have day tripped to an alternate reality,
come face to face with that strange state.
It exists, but I can ignore it.
And maybe if I never return,
it won’t happen to me.

All he wanted, all he hoped for
through these years of fighting
was to be ok.
Was for everything to turn out alright.
Is this alright? This ending here?
Is death “ok?”
It’s not what anyone had in mind, in prayer, or thought, or plea.
But it must be, it has to be.
It is so and so it is. Ok.

In the end, his senses continue to fade.
There is no valiant struggle, no mighty battle against pain.
Even his sadness is weakened, almost insultingly dull.
But though his body lies flat on the bed, and his eyelids droop,
his pupils are wide as the sky.
He is no longer bargaining for one more chance, a woman to love, and child to raise, a day on the beach or a run in the rain.
He is beyond all that.
With those eyes he is seeking, and receiving, one last drop of light.
It is enough.

3 thoughts on “Road to Rhode Island”