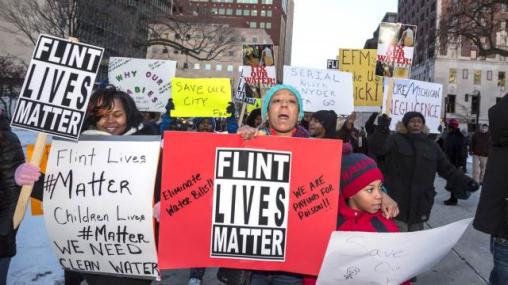 It takes something truly egregious to catalyze public action – we all now know the harm that was done and the toxic combination of neglect and manipulation that led to it. Will Flint be the tipping point?

The violation of human rights in Michigan has been going on for decades – the inevitable result of maintenance deferred in a strained economy. The canaries have been singing for awhile with emergency management, crumbling infrastructure, job loss, poverty, failing education, and so on. But since we keep falling it seems we haven’t hit bottom yet. As with other social movements, mere mistreatment isn’t enough to provoke true change.

It takes something truly egregious to catalyze action and Flint may provide the spark.

The Straw that Broke

When Occupy Wall Street began in New York in September 2011, it was not in response to a novel adversary. It was the result of accumulated frustration born out of years of an aggressively widening wealth gap and the oppressive crunch for a majority of Americans whose labor sustained the excesses of the 1%. The Occupy movement arose from America’s vacancy of judgment that would have held the perpetrators of the 2008 financial crash responsible – and the outrageous hypocrisy of government bailouts for criminal, too-big-to fail banks, but not for victimized, too-small-to-care people.

In a similar way, police brutality, mass incarceration and racial disparities in law enforcement have been plaguing the American criminal justice system since day one. But now they are part of the rapidly rotting infrastructure of our country – having worsened, unchecked for decades, until the summer of 2014 when the back-to-back deaths of Eric Garner, in New York, and Michael Brown, in Ferguson, Mo., catalyzed the birth of the Black Lives Matter movement.

When the city of Flint was put under emergency management more than five years ago, the public responded immediately with protests, lawsuits and resistance. Despite small victories, the mandate for emergency management persisted. Similarly, when Flint’s water source was switched from treated Detroit water to untreated Flint River water nearly two years ago – the same moment, coincidentally, when Detroit’s own water crisis hit the news – people reacted in force, brandishing bottles of dirty faucet water before public officials, marching in the streets and writing articles to generate media attention.

On its own, a mere violation of health and human rights isn’t enough to produce change. There needs to be proof. Flint’s version of the Garner “chokehold caught on tape” were the lead test results of Dr. Hanna-Attisha, which provoked an announcement of a public health emergency in October and, finally, exposed the water poisoning story to the nation. We all now know the harm that has been done and the toxic combination of neglect and manipulation that led to it.

It’s always easier to identify the hurt than to implement the solution. In this case, that is because many of the consequences of the Flint water poisoning are permanent – the mistakes irrevocable. No one in the city will actually get what they truly want: for the damage to be undone. So, what is to be done instead? Where do the frustrated mothers, the empathetic partners-in-struggle and the outraged general public go from here? The movement seems to be coalescing around a few ideas.

First: stop the bleeding. Flint residents need clean water now. Thankfully, this crisis has already been met, to an extent, through continuous donations of bottled water, faucet filters and a switchback to clean Detroit water (though still being transported through lead-leaching pipes).

Second: stop punishing people for what was done to them. Flint residents have demanded that the false debts over bills for expensive poisoned water be eliminated. Unpaid water bills can lead to residents’ water being shut off, which, perversely, can further deteriorate the pipes. This, too, has been addressed through government-funded payoff programs, which, if implemented correctly, will eliminate the bogus water bills. Furthermore, the city must hold off on tax foreclosures of properties whose water bills led them to government seizure.

Third: undo the damage. The state legislature in Michigan has yet to fund infrastructure redevelopment – perhaps because those politicians are waiting for the federal government to do it, or perhaps because they’re hoping that the specter of public scrutiny will pass, or perhaps because they are Tea Party conservatives committed to “zero tax increases” for any reason. What Flint residents want is a safe, functional infrastructure, and they want their peers to be the ones hired and trained to provide it. The state of Michigan should establish a public works program, modeled on the Roosevelt era, to train and deploy local residents who will replace the water pipes in Flint – and gain much-needed employment in the process. In addition, alternative water sources such as rainwater collection barrels should be made available to reduce dependency on dubious public pipelines.

Finally: prevent this from happening again. There are a great number of measures that can help prevent another Flint, yet none of these have been implemented in any substantial way. Ending the Emergency Management government-takeover process would be a huge first step. Michiganders across the state are calling for a repeal of PA 436, the bill that contains the provisions of undemocratic government takeover on the premise of “financial emergency.”

Michigan not only suffers under the control of unelected appointees – it is also a heavily gerrymandered state, meaning that citizens’ elected officials do not hold power commensurate with their votes. Michigan, like other states, needs independent redistricting to ensure that those in power were actually elected.

Nationwide, we needs better communication between the EPA and local government so that the identification of a problem triggers a response and a resolution. (Remember how angry Congress professed to be when General Motors was found to have covered up a defect that led to scores of deaths?). Some are calling for state laws that would guarantee a right to safe and drinkable water, as in the state of California.

In addition, we need continuous long-term oversight of public health data, like the Flint Water Study conducted by Virginia Tech. As with police shootings, there is a need for democratized data that allow citizens to keep their own statistic. Independent data networks that allow individuals to report water tests across cities and over time

Finally, we need a government to whom the word “emergency” refers to a human threat, not a financial one. Nine municipalities across Michigan have entered into emergency management at least once over the past decade for financial reasons, yet human crises don’t elicit the same reaction. In fact, it was under the guidance of emergency management Kevyn Orr that Detroit suffered its own manmade water crisis with the mass shutoffs in 2014. Problems like these will continue as long as money is valued over people.