For the first 14 years of my life, I really didn’t talk to boys.

It wasn’t really a problem in elementary school and, while it kinda sucked always sitting at the singles table in middle school,  it wasn’t that big of a deal. But it was definitely an issue in high school. Girls seemed to measure how much they liked another girl based on on how much boys liked her, and I was barley in the equation. Somehow I was a member of the cool crowd but it always felt like a favor rather than a fact. It didn’t help that I lived far from school and had to ride the bus ride home while the city kids hung out. My friends tolerated me because I was easy to gang up on and I tolerated them because they were cool.

It was midway through freshman year and I got invited to an “away” basketball game with two of my friends who were both dating boys on the varsity team. While we were sitting in the bleachers, one of their boyfriend’s friends came and sat down next to us– next to me actually. He was incredibly intimidating, attractive, mature and just superly stupidly cool. His name was Josh. He tried making conversation but I found it almost impossible to talk back. Finally, I came up with the excuse that I had a headache to end the tortured interaction, but it backfired when he suggested we go to the vending machine to see if they had any Tylenol! I was not prepared for such an offer. I said “no,” “that’s ok,” “don’t worry about me” and that was it. He left and sat somewhere else.

My friends could barely hold it together. After the game one of them practically cornered in the parking lot: “MICHELE! What are you doing??? When a HOT JUNIOR wants to talk to you, you talk to him. When a hot junior wants you to go to the vending machine with you, YOU GO!!!” Obviously she was right. I completely blew it.

But I got another chance. Josh and I both ran track that spring and when he talked to me, I talked back. We hung out between races and smiled when we passed each other during warm ups. We actually started “going out.” He was my first boyfriend and my first kiss (except for that it wasn’t really a kiss because he was over 6 feet tall and I was under 5 and we missed each other’s mouths on the first try). We went to the Winter Carnival dance together in a group of the social elite. I had arrived. And, oh my god, it felt good to drive away from track practice in his fancy red car past all the kids who were waiting for their moms to pick them up.

Mostly we spent our time together half watching movies in my basement and half making out. It was all pretty innocent.  Once, I actually saved an eyelash that had fallen out and planted it on my cheek so he would find it and have me make a wish. That’s as far as my fantasies went.

But while I had barely hit puberty, he was a hormonal teenager. He wasn’t satisfied with getting worked up for hours on end with no release in sight. He was never overly aggressive but he was all kinds of frustrated and it just couldn’t stay like that forever.

Spring break was coming and Josh called to say he wanted to see me one last time before he left for Florida with the football team. He said he had a present for me and, by the way, I should wear sweatpants that night. In some corner of my mind, I knew he was implying something and, while I didn’t allow myself to clarify what that was, I knew that it scared me.

I don’t know what I expected but it hurt to see the look on his face when I opened the door and he saw me there in jeans. We hung out for a while– the usual modest make-out session– until he gave me my gift- a big manila envelope  and took off.

I went straight up to my room and emptied the envelope out on my bed. Inside there were a few hand-written pages and a pile of CDs with instructions to play a certain song a different points throughout the letter.

Well, I’m leaving for spring break tomorrow. This will be the longest we’ve gone without seeing each other since we started going out. And baby, I don’t want you to worry about me but I know you will. I’ll be fine! But I just have to say this in case– if anything happens to me, I want you to have my car.

And don’t worry about me getting distracted while I’m down there. I’ll be working hard all week trying to impress coach. I really want to make first string next fall. But when I’m not playing football I’ll be thinking about you. Because, baby, if we did what I think we’re going to do tonight, then I won’t be able to get you off my mind.

The note was so short that I read the whole thing before I even got done with one song. I just stared at it, kinda shocked while I caught up on the musical portion. My first impression was that it was hilarious how serious he was being. We did not call each other “baby”, there was zero part of my brain that was worried about a little trip to Florida, and it was pretty stupid to think I would get his car if anything did happen. It didn’t even occur to me.  But. But. There was that other part that put a pit in my stomach. I was the prude who wouldn’t put out. I was still the girl who wouldn’t go to the vending machine. And here it was in writing: his expectation, my failure. My sweet, cute, boyfriend was all excited about something that categorically did not happen. And now he was in Florida with all the coolest guys in school and if he was thinking about me, it wasn’t good.

I knew it over after that. We still went to the prom together because the plans had already been made, but Josh dropped me off at home at 10 and then went to the real party after. He came over one more time and, when I gave him back his CDs he politely broke up with me.

Almost immediately Josh got another girlfriend– the new girl in school who was insanely pretty and noticeably more mature than I was. The rumor around school was that they were so into each other that they french kissed at every stoplight while he drove her around town in that red car. It was the absolute opposite of what our relationship had been; they were choking on tongues instead of wishing on eyelashes.

Not long after that, I got mono, which is basically the high school equivalent of an STD. Some part of me was actually proud that I had even been in a position to acquire the “kissing disease” but I was also ashamed to think that he had probably passed it to me from someone else.

Of course, once I lost my popular male chaperone, I was a social liability.  The cool crowd officially dumped me too and I was back to riding the bus, more alone than ever. The long trip home gave me all the time I needed to agonize about the whole failed drama over and over again. Every stop along the way was like an insult, reminding me of what I had given up. I didn’t get it: Why couldn’t I be like other girls? Why couldn’t I do what they did? Why did I have to make such a big deal out of it? why was I always such a baby? Why was I such a loser?

It took a long time but I eventually built much better friendships with both boys and girls. It took a longer time for me to stop obsessing about my failed encounters with the opposite sex. These days, I have a lot more pride in the girl who defied expectations and wore her tightest jeans on the night she was supposed to wear sweatpants, and I have a lot more compassion for that innocent girl who knew so little, and yet knew enough to realize that whatever it was, she just wasn’t ready for it.

I wrote this story as I remembered it, but afterward I went back to my parent’s house and found the box of memorabilia from my first relationship. I didn’t find the note but I did find a lot of incredible pictures and notes from that time. Reading back, I realized that Josh was more patient and sweet than I remembered and that we actually liked each other quite a bit. Still don’t regret taking my time though… 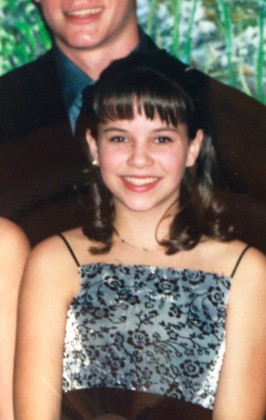 One thought on “The Fast Lane”