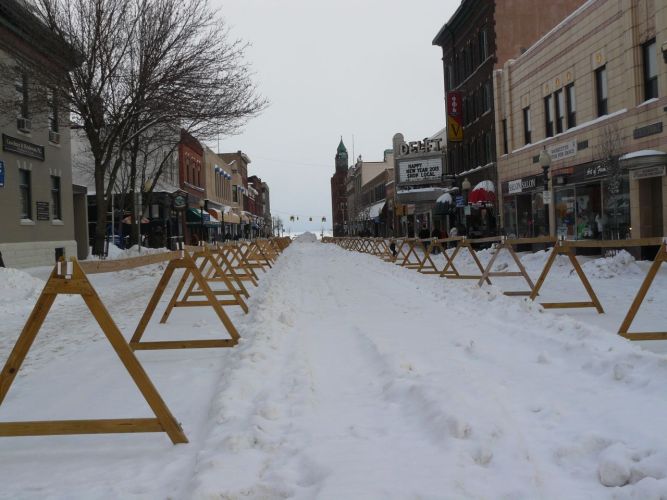 The streets in Marquette are closed off where the sled dogs will be coming through in the next few hours. We get a spot by the window in a downtown pizza parlor and watch the people congregate on the sidewalks. I’ve never see a sled dog race before but I’ve imagined it. In my mind, the starting line looks something like that of a horse race (though I’ve never seen that either), all the teams are lined up together, with animals straining against that boundary for the moment when the gun will blast and they can take off together in a mass of confusion and energy and competition.

Not so. The teams are launched individually at 5-minute intervals and the energy is restrained as in those who have a long way to go. The teams consist of 12 dogs tied up together to an aluminum sled with a single person standing on it. Each group is announced one-by-one and there is a countdown to the moment their clock starts.

The commentary by the person holding the microphone is cheerful but muted– everyone is cold and there’s only so much to say. She announces that this rider is from Finland, that rider from Minnesota, this team has run here 4 years in a row, etcetera and then we wait. As a sled glides by, I am struck by how modest it all is. The dogs are smaller by far than I expected–nothing like the bulky show huskies you see in dog parks and greeting cards. The sled is exceedingly low-tech, more or less the same as it must’ve been decades ago– I’ve seen more complicated gadgets for power walking. The clothing is fur across the board, for exactly the same reasons its been worn for millennia. It is comforting to consider that technology has failed to develop anything better after all this time.

One by one, the sled teams take off. They are fast, but not really, and they are together but so alone as they head out into the dark.

We spectators are cold just watching them, and we have hot cocoa to drink and warm beds to climb into anytime we want. We are tired just standing here and they have 200 miles to run through (or to stand through, for the driver). There are only 14 teams this year– half as many as usual– because the extreme weather forecast has scared off many contenders.

After the teams are gone, mom, grandma and I pile into the car to head to a place outside of town to join a bonfire and watch the racers go by. We don’t know what to expect and want to come prepared so we pick up some bourbon and a flask that we imagine will be passed around the circle of hearty stocky Yoopers.

We are heading to Lakenenland, an otherworldly sculpture park 15 miles out of town that I passed through on my backpacking trip under similarly magical circumstances. This place is a haven of world-class art and a bastion of culture made all the more spectacular by its remoteness. It’s a fascinating reminder of the incredible things people can do and often do do here in the UP. I love it.

In spite of our anticipation, we almost have to give up and turn around. The road from Marquette follows the Lake Superior shoreline and the unbroken wind coming off the water slams hard as a hip check against the broad side of the car and every gust is thick with so much snow that we can hardly see where we’re heading. This is clearly dangerous, but this is not just our route to the party, it’s also our way home. At what point do we give up and turn around? We worry that we aren’t even on the right road. We marvel at what people who live here endure. We shake our heads at the thought of all those sled teams. We set a turn-around deadline if we don’t see it soon, and then….we arrive.

From the parking area I can see the flames licking up in the near distance but there is snow and darkness in between and I have no idea how to get Grandma to where we need to go. I tromp over on foot and track down the proprietor, Tom Lakenen, and tell him my problem. A solution is at hand.

Moments later, I, mom, and even grandma are piling into an aluminum canoe. The bottom is covered in straw and we sit on it. “Hold on tight!” calls Tom and then revs the snowmobile fixed to the front of the boat. Off we go around the park in the dark, floating on snow in a boat with no oars. My eyes are forced closed by the wind but, every so often, I see one of those crazy metal sculptures whiz by. We pull up to the fire and cheer.

Around the fire we drink cocoa and talk. I reunite with friends I made on the backpacking trail and introduce mom and grandma to the people they know of as characters of my travels. The burning logs are impossibly large– this is not firewood, it is timber. The pathway to the homemade porta-potties are lit with candles in ice sculptures made from frozen water buckets. Every so often, a shout rises out from the darkness and that’s our sign that a sled team is about to come by. We leave the comfort of the blazing fire to run the short distance to the route and cheer and hoot as they pass by– approaching, arriving and, in an instant, gone. I imagine it from their perspective- from the blackness of night and the numbing white wind, they share a moment of contact with people and all the comforts their presence represents. Then, away again into the night.

There will be no driving back to Paradise tonight. The distance alone is formidable and this storm simply won’t allow it. We say our goodbyes and return to Marquette, filled with appreciation and even pride for what we just did– rode in a canoe pulled by a snowmobile to get to a bonfire to watch sled-dogs run through a blizzard on a 200 mile race– that’s what we did tonight.

We can’t take credit for all the fascinations of this day but at least there’s this: Yoopers know how to live and we know where to find em. 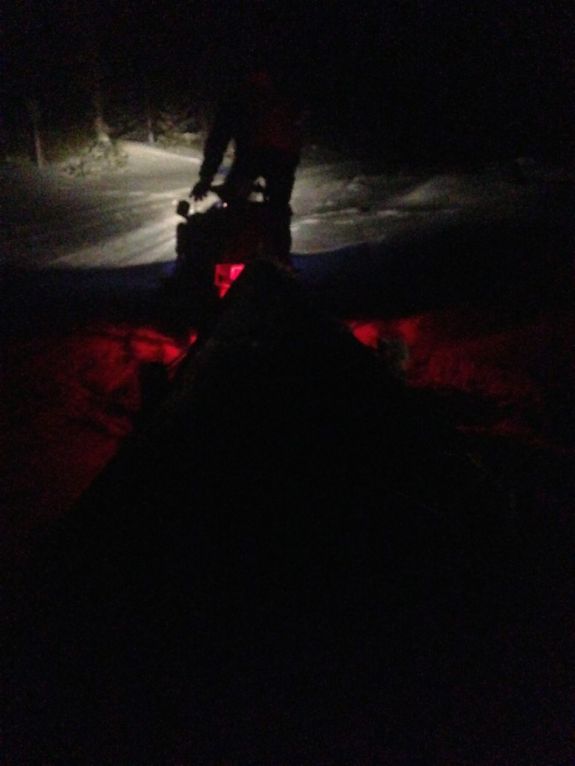