Isle Royale is awesome, I am camping at Todd Cove after my first full day on the island and I feel great. I swam naked again, there was absolutely no one around. I was in the open sun for a lot of the day and I used dirt as sunblock. Unable to see myself, I wasn’t sure if it actually worked but I just took a selfie and yup, it stayed on just fine. There is a dock near the campsite and I jumped off of it and into the water. It made me laugh. I don’t usually do those playful things alone, I guess. I realize how rarely I laugh on my own, which is kind of sad because it means I haven’t laughed very much on this trip. Laughter is just a social thing so it’s understandable why I haven’t. Still, it’s a very sweet thing to laugh on my own in joy. I looked at my naked body while I laid on the dock to dry off. Certain things displeased me, like the small padding on my stomach or my hairy bikini line. It was nice to simply observe those things and let them go. I can’t do anything about them and there is no one around anyway so why would I suck in my gut?

Yesterday when I got to the island, I reported my itinerary to the ranger station and hit the trail. Within 2 miles I got turned around because I am a dope. There’s a little cave off the trail that I wanted to check out, it’s all of 200 meters away from the trail, but I so loathe backtracking that I continued on a different trail instead of doubling back. When I reached the water, I kept the shoreline on my left, as it had been before, without realizing that I had actually crossed over to the other side of the island and was circling back to where I started. The whole island is like little diagonal strips of land and the northeast corner where I stated is particularly narrow. Woops, lesson learned. I had to change my itinerary because I lost some time but it all worked out.

Last night I camped at Lane Cove. It was nice to have a proper campsite with flat ground, no brush, and even a bench (such amenities!). I bathed in the lake and did some laundry. Some other campers showed up and I befriended them- 3 brothers on a camping trip and a solo male backpacker at the start of a one month tour of the island. I told them about my trip and some of what it meant to me. I told them that it was trail therapy which they seemed to immediately understand. I asked one of the brothers to tell me about himself and he mentioned that he’d just graduated from college and was looking for a job. His brother said “why don’t you tell her what’s really going on in your life?” and then when on to tell me how his brother was actually about to get engaged. I thought it was a beautiful sentiment, that the relationship stuff was more important than the work stuff, but I also couldn’t help but feel that he was way to young to be getting engaged. I wrote a long note but didn’t give it to him, though this morning I did leave notes (slightly less preachy) for all of them at a trail marker. 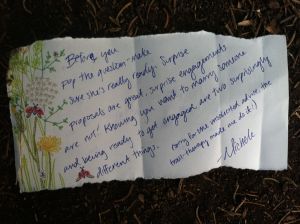 I woke up earlier today than I have at any time on this trip because I am determined to see a moose! I have to see one. So far, they and most other forms of wildlife have eluded me. No doubt it is in part because I have woken up late in the morning, and because I keep my head down as I walk. Sometimes I lift my eyes and it’s like “Hello world!” I have been focused on the bottom of it! I do it especially on Isle Royale because there are hundreds of tiny froggies sunning themselves on the trail. They scatter when they sense my approach but often they just jump into each other in a cluster of confusion and I am torn over whether to wait it out or tromp over them. It feels like a scene from Gulliver’s Travels. The more frogs I encounter, the more ruthless I become… I have also seen a few really large frogs swimming in Lake Superior. They seem very daring and somehow out of place.

My early start meant that today was a very long day and I went slowly, taking plenty of breaks. On one of them I thought I spotted a beaver, but instead they were massive pileated woodpeckers (how did I confuse that?!) Not as cool but still very impressive. 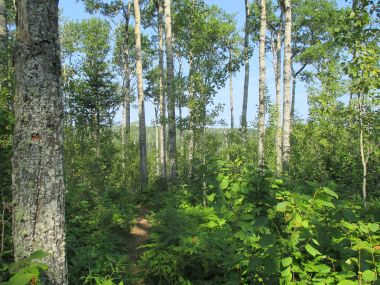 I passed a fair number of hikers today. Once I went by a woman and felt a momentary pang of disappointment that there was another solo female hikers but then her partner came around the bend. My ego grinned. Passing a family, the mother said “Are you all by yourself?” and when I said yes she shouted “atta girl!” In 6 weeks, I have seen less than 5 solo men and no solo women, I have seen only one person (the guy I met last night) who planned to hike for more than a week, and no one who has gone as far or as long as I have. Mentally, I’ve been comparing myself to other backpackers which makes me feel inadequate. I have broken no records, I have don’t nothing particularly unique. But if I shift my perspective to compare myself to people in general, I realize I might be the only one in the entire state what is doing or has done such a thing. Why the hell am I so hard on myself for not going far and fast enough? Why am I comparing myself to anyone at all?

I have had the “Wicked” soundtrack running through my head on and of for days, and in the last 24 hours it has been almost constant. I don’t know if it should give into it and sing along or fight back. Its getting bad.

I have started picking at my hair a lot more recently. I think it started with the “fuck it” mentality that comes with bingeing and it has spread over into other bad, if trivial, habits. I really regret not bringing a book this last week! Am I trying to drive myself crazy? Funnily enough I just singed my hair while I was leaning over my stove cooking dinner so now there’s less to pick at. Maybe it’s alright that I’ve been picking it, if it were longer there would have just been more to burn!

I am thinking about Laura, she could be in labor right this minute, about to become a mother. I am working on the quilt square to send my love her way. I hope everything goes well and I hope she feels free to scream as loud as she wants to!

So, I was working on my quilt square and enjoying the insanely beautiful sunset when a boat came by in the distance. I added quite a nice touch to the vista until I heard the men on it. Their voices carried over the water crystal clear and it was a long string of “Fuck you!” and “You fucking idiot!” an

d so on. Nice. There are two main forms of traffic on Isle Royale- the hikers and the boaters. I haven’t crossed paths before with the boating crowd and I wasn’t a great first impression.

They pulled up to the dock I swam on earlier and proceeded to act like drunk idiots. I plan to wake up before dawn again tomorrow and I refuse to let these guys prevent me from seeing a moose. I had a choice- wait till they piss me off and then yell at them, or make my presence known and give them a chance to not piss me off. I opted for the latter. As they say, you catch more bees with honey than vinegar.

I walked over to them and complemented their boat. “What a beauty!” We chatted about our respective trips, they reminded me that it’s a Friday night and invited me to join them for a party. I never explicitly told them to keep it down but they invited me for a beer and some fried fish- (so hard to pass down but I’d already eaten and didn’t want to encourage them!) and I declined, telling them that this was the last night of my trip (not quite true) and that I was waking up at 5 am (also not quite true). One guy said “well when we make too much noise just yell at us” and I said “when?” He got the picture.

Now time for that beauty rest!

Continue to the next entry in the series here: Day 43: Todd Harbor to Moskey

Go back to the previous entry in the series here: Day 41: Copper Harbor to Lane Cove

One thought on “Day 42: Lane Cove to Todd Harbor”