My birthday was a month ago today, its strange because it actually seems like longer. I’ve come a long way since then but I’ve also fallen back quite a bit. Even though I’m still battling every day, I do know that I have come a long way from where I was 4 or 5 or 6 or 7 or 8 or 9 years ago. I am so much closer to recovery and health, I am headed in the right direction even though I haven’t yet reached my destination.

Today I walked along the network of well-traveled ATV and snowmobiling roads through the tiny town of Ahmeek. I bought an ice cream cone, which turned into a lot of snacking. If I had more money or food, it might have turned into a full scale binge. It’s so hard for me to indulge just a little! Once I start I want to keep going and just give in.

Today leaving Ahmeek, frustrated, I felt closer to crying than I have in a long time. My emotions were so on the surface at the beginning of my trip, but since I have returned to bingeing, they have been shoved back down. Struggling with my helplessness around food. Aching over overeating but not letting myself purge, THAT is the best way I know to conjure up pain and torment. Still, I didn’t manage to cry. 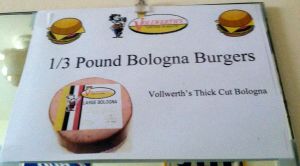 I was deep in self-torture mode when I passed a tiny bar on the side of the road. I wrote a little note to Sarah and went inside to buy a Coke. As I sat there, a man burst through the door and told one of the most absurd stories I’ve ever heard. Here’s the basic plot: a bear was digging around his garbage can and making a mess, the man got his gun and shot it with what he claims he thought were blanks (either he’s lying or dangerously stupid). They weren’t blanks and the bear died, so he and a friend dragged the bear to a pond and dumped the body in the water to destroy the evidence. BUT the next day the man returned to see the bloated body of the dead bear floating in the water, so he loaded it up with bullets until it sank, and finally then all was well. The man told the story with such sincerity and pride that I was baffled. I understand that my view of bears (majestic  sacred beings) is different from that of a lot of people here who have to deal with them on a regular basis (obnoxious big raccoons) but this? Come on! To my relief, the other men in the bar didn’t seem impressed, and the storyteller, having received no applause, or even a response from his audience, turned and left.

This evening I arrived in Eagle River, yet another tiny town along this remote stretch of land. It’s a beautiful little village with a shockingly classy restaurant and inn along the Lake Superior shore. I set up my camp on a nearby stretch of beach and bought a delicious healthy dinner. The view from the restaurant was incredible, the vast lake truly looks like an ocean. In the restaurant, I sat at the bar and talked next to a nice guy. I think we both assumed each other was not that worldly, so I was surprised to hear that he flew in from Tokyo, where he lives and he was surprised to hear that I live in NYC despite my rugged appearance. He was friends with the guys who run the place, two cool guys my age, and he invited us all to his place later on for drinks and good company. I think I’ll go. He also offered that I could stay in his “cottage” but I don’t actually know him and anyway, it’s my last week! I have to camp.

Continue to the next entry in the series here: Day 40: Eagle River to Copper Harbor

Go back to the previous entry here: Day 38: Houghton to Calumet

One thought on “Day 39: Calumet to Eagle River”