I can’t sleep without writing damn it! My brain wont let me. I have over 8 hours until my alarm goes off and I look forward to some high-value sleep given that I am in a BED. A woman named Connie from the nearest North County Trail chapter took me in. Yay! I think that I’m sleeping so many hours lately not just because I’ve been walking so much, but also because the sleep has been so unrestful. In addition to the normal issues of cold nights, teetering on my sleeping pad and bug bites, I have been scared every single night since leaving Marquette. Its amazing to have such a stretch of fear after having none at all up until now. I’m a more seasoned backpacker now, but I am not immune to the threats of coyotes, wolves, moose, questionable mushrooms, and murky grey shapes behind trees in the rainy-soaked dusk. Last night I had a new concern– drunk drivers.

I slept just off a road, which seemed to be very untraveled. I tried setting up my camp in a piece of property just off the road but the ground was a hard-packed clay. The whole tent relies on the tension between the two ends and it collapses without a good hold so I absolutely needed to stake it. I dragged my half-made camp down the road another ½ mile until the looming darkness demanded that I settle for what was available– a little turn-around near an entrance to some private property. I could see skid-marks in the clay dirt and suddenly the remoteness of the location began to feel sinister instead of secure. Just like the last time I slept in a turn-around like this, it was Friday night. I could easily imagine some bros with a pick-up and nothing better to do driving around back roads with a 6-pack, spinning out and goofing off where they thought no one else would find them. After fretting in my tent awhile, I got out and set up my pack against the road-side end of my tent, hoping to create a barrier or at least a speed bump for any potential threat. Of all the ways I have contemplated dying on this trip, getting run over by a drunk driver is the least appealing- nothing poetic about that at all. 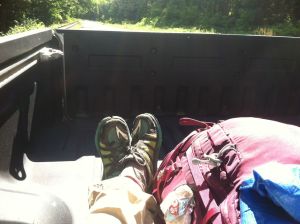 But! I am in the Keweenaw peninsula! Oh my god! The end is in sight, kind of. This morning I walked the empty road to the non-town of Herman from the non-town of Nestoria. After almost 6 miles, a car drove by and I hitched (hailed) a ride. I was out of food so I just wanted a ride to the nearest store. I loaded up my pack in the back of his pickup truck and sat next to it in the bed while I watched the road roll away behind me. I just wanted a ride of a couple miles or so but the driver offered to take me all the way to Baraga. I was already in the car so I said yes. We went all the way to the happeningest gas station I have ever been to.

Baraga is an Indian Reservation and so is not subject to the same taxes and regulations as other places, meaning it has the cheapest gas for miles around. I bought myself a froofy coffee drink, charged my cell phone and grocery shopped through the aisles. Shockingly, I ran into people that I know! First, the man from near the dam who was picking blueberries (and who I suspect of inadvertently mis-guiding me). He said he’d told his coworkers about me and was glad that I made it alright. I told him wife that he was a

great guy. Right after, I ran into the odd couple who had given me a ride back to the trail. Everybody loves cheap gas! I gave them my leftover water jug, a battery and the book The Crucible with my name and contact info in it. They too said they’d been wondering about me. Same sentiment in an email from the fisherman group of yesterday who fed, hugged and revived me. It’s strange to thing that I am a character in these people’s lives, someone they know of and wonder about. The last crazy run-in of the day happened when I was walking along Highway 41. I was in my head, singing to myself and trying not to pay attention to the all-too-frequent mile markers alerting me of my slow progress when I noticed that I had a voicemail. Tommy Reifel, a cute guy who I went to high school with called me to say “we just passed you on the side of the road!” Apparently his band was playing at a music festival up in the Keweenaw and they had just driven by! It was crazy. I was happy that someone from my life back home had witnessed me in the act of what I am doing. I was bummed that they didn’t stop- how cool would it have been to reunite for a minute, maybe get a serenade? Then again, I’m glad that they didn’t stop because they would have broken my streak of going for over a month without seeing the single face of a person that I had ever seen before this trip. Then again, I see familiar faces all the time because I get to know them and we cross paths again. The cashier at the gas station begged me to visit on my way home 🙂

I had been in touch with various North Country Trail volunteers back in Marquette and my new friend Connie gave me advise about my path here in the Keweenaw and offered to let me stay with her and her husband for the night. It was SO. GOOD. to shower. I scrubbed myself for a long time. 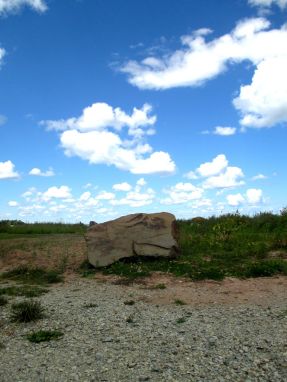 Accepting that ride all the way to Baraga meant that I unintentionally agreed to pass by the town of L’anse. Lance. It feels symbolic that this place even exists, that it is on my path, and then, that I passed it by in a car, unable to commemorate it or pause to soak it in. I composed a letter to him in my head while I walked later today. I thought about how, when a relationship ends, you lose the right to help the other person, to convince them of your way of thinking. They aren’t yours to fix. And so it means so much when the person that you care so much about, but are no longer with, actually does take the time to understand your point of view, and actually learns something through the whole painful process. I think we both have. In some ways, it makes it harder. I wish that I could vilify Lance and make him into a bad guy. I can’t. He’s not. My heart was aching.

Continue to the next entry in the series here: Day 38: Houghton to Calumet

Go back to the most recent entry in the series here: Day 35: McCormick Wilderness to Herman Road