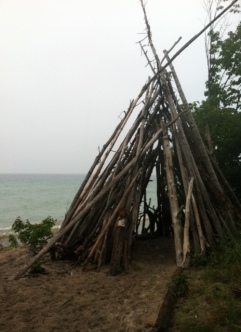 I think I’m in a toxic relationship with the trail. It treats me so badly but I take it back every time! Even when I manage to stay on the trail it is often poorly marked, grown over, blocked by fallen trees. And every time I lose the trail, I curse it and get mad at it and resent it. But of course, when I see that first blue blaze again after being lost, I am flooded with relief and appreciation. I regret every negative thought I ever had about it. I didn’t mean it! Things will be different this time! Then I turn on myself- how much of my blundering is my fault? I am candidly looking at myself and wondering if I actually have common sense. Being out here alone, it’s hard to know if the trail is objectively difficult or if I am just being an idiot.

I think it’s a little bit of both. With so few hikers on the trail, it is not well trodden. Also, the entire path is volunteer-maintained, so they can’t keep up with every square inch of it at once. I’m sure it took a lot of work to come back after all the fire damage so the remaining areas have probably been neglected.

Then again, there are plenty of things I could do to make things easier on myself. I could pause when I get to an intersection. I could reference my map more. I could slow down. I could get over myself and turn back when it becomes clear that I’ve made a wrong turn (I utterly loathe backtracking). 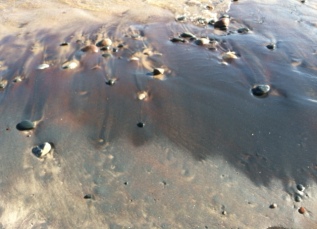 This morning I left Muskallonge park and followed the trail along the shore. I had heard that the trail was closed farther up but I preferred following it for awhile rather than walking along a road and I figured there would be a detour. I was wrong. The trail dead-ended and I had to make the choice to either go back, cut in toward the road, or follow the shore. I opted for the scenic route along the water. It was pretty, but definitely much harder than it needed to be. Before long, the beach disappeared as the bluffs and shoreline converged. I carried on slowly and quite wet. I had to stop 3 times in the first hour to take off/put on my shoes.

The fear-fueled adrenaline and the generosity-induced warm fuzzies have worn off from yesterday. It’s been a bummer of a day. Even when I manage to follow the trail, it is a frustrating saw-tooth pattern. It follows the beach for a while and then jogs back inland around the sporadic plots of private waterfront property. My left leg is killing me- shin splints from walking on the beach. The weather, cold and wet and grey, doesn’t help.

Things are looking up. I made it to the beautiful little town of Grand Marais! I got another package of mail with a sweet note from mom. The campground is full so I’m going to have to illegally camp on the beach. Tomorrow I head into Pictured Rocks, a place I’ve heard about for years but never seen for myself.

Walking into town, I saw a sandwich board that said “Concert Tonight” 7pm on a Monday night, who wouldn’t guessed! Normally I wouldn’t attend something like this but right now I appreciate the hell out of it. This is the kind of spontaneity that is healthy for me (aka doesn’t involve me getting lost) and I love being open to it. I couldn’t have planned it if I tried.

I love watching kids dance around the grass while the music plays. The band played the “Jersey Boys” soundtrack and a 50 year memorial for JFK which was really well done. Right now they are playing the service anthems for all of the different armed forces: Air Force, Marines, Coast Guard, Army, Navy, etc. People sitting in the audience stand to receive recognition when their song is played, I can’t believe how many veterans there are here, young and old. As they stand to receive their honor, they all look so proud. It makes me want to cry. I don’t think I’ve ever felt so patriotic.

Continue to the next entry in the series here: Day 25: Grand Marais to Something-Mile Beach

Go back to the last entry in the series here: Day 23: Lake Superior near Two Hearted River to Muscullunge State Park